Every so often I see pictures on Pinterest that feature the Owl Builder Punch (Found on page 167 of the current annual catalogue - £16.00), or more specifically things made that may not be owls.

A friend asked if I knew how to make some of these alternative creatures, so I set about looking around for ideas & designs.

It was decided that the Craft & Chat held today at Tesco Extra in Lincoln was going to feature 'Owl Builder' Punch Art.  In preparation I created 16 examples of other uses for the Owl Punch, some of them also used other punches (also from the Stampin' Up! Catalogue).

In the end I had created: Hippo, Reindeer, Cat, Dog, Penguin, Pig, Frog and several more.

Here are all of the examples I created, the only ones created by me was the Red Vase of flowers and the Black & White Dog (I have not been able to attribute them to individuals as it has proved virtually impossible to trace the creators of each).  If additional punches have been used I have added this by each creature. 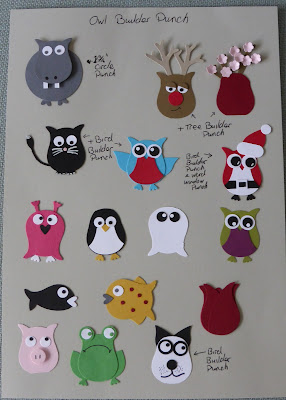 During the Craft & Chat we were discussing using the punch to create a Snowman... we nearly had him designed, but was not able to actually try it out as we ran out of time.  So once home I got playing and did also create a Snowman. 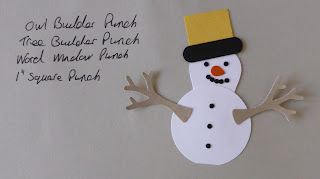 All in all this punch is great value for £16, not only can you create owls but many more animals... the items I created are just the start, if you look at Pinterest you will find 1,000s of examples.

Posted by Helen Ann Crafts at 11:12 No comments:

Less is More - Life's a beach!

I am hoping that I am able to sneak this card in just before the Challenge on the Less is More blog ends.  This week it is a Theme, 'Life's a Beach!'

Now Stampin' Up! does several different water based stamp sets, I just don't have any of them at the moment, so I thought I would end up missing this week.  But you as you will have gathered I am here, writing this post - so what changed.

Last Sunday I met with several other Demonstrators to have a day of Craft (with some cake thrown in as well - Thanks Zoe).  Each person had made a card (or bag) and created kits for each person to make, by the end of the day we had all made 5 items to take away.

The great news was that one of the cards was created using the 'By the Tide' stamp set, so here it is. 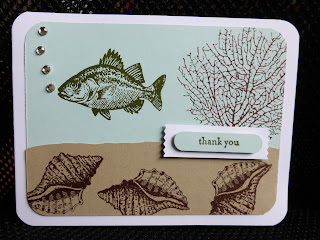 The card also features the new 'Washi Label' punch, teamed with the old faithful 'Word Window' Punch, and a few Rhinestones.  This card uses only 3 images from the set (there are 7 in total)... 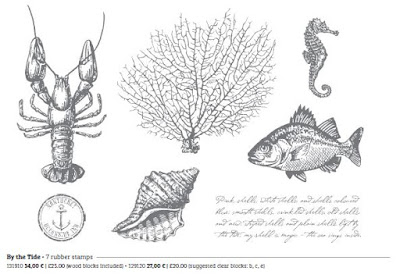 The deals available for this week are only available while stocks last.  So if you would like any of the items shown below you can order them directly from my web site (www.helenanncrafts.stampinup.net), click on the 'Shop Now' link and then from the left hand menu select 'Weekly Deals'. 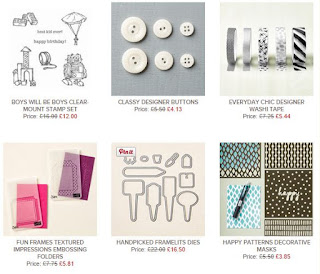 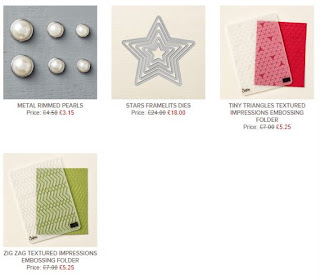 Posted by Helen Ann Crafts at 07:04 No comments:

Less Is More (One Layer - Masculine)

Over on the Less is More Blog this week it is one of the worst challenges going.

Not only do we have to create a card with one layer only, but the topic is Masculine! Well, I think I can safely say this is a challenge :)

I had an idea in mind, I wanted to use the new stamp set from Stampin' Up! called The Wilderness Awaits. 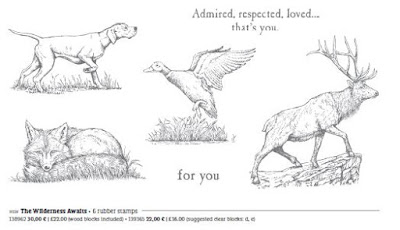 Once I had stamped the image I wanted to add a bit of colour, after several failed attempts this was the version I was happy with... 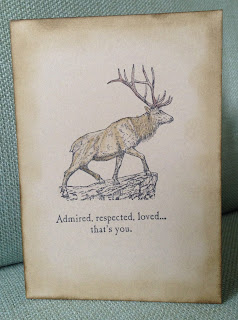 Both the image and the sentiment were stamped with Memento Black ink, the card base is Tip Top Taupe card (one of the new In Colours this year) .  I added a bit of colour to the stag and rocks using my Naturals Ink Pads and Blender Pen.

Around the edge of the card I used Soft Suede ink on a Sponge Dauber to soften the edges.

All of the materials for this card can be purchased from my web site...
www.helenanncrafts.stampinup.net

This week over on the Less is More blog the challenge is to create a card featuring the colours, Red, White & Blue.

So with my thinking hat in place I set to work and came up with not 1 by 2 cards...